By Helen and Kate

While we were cheering at the 30/50k races we (Helen, Kate, and Rosalie) were very cold during the women’s 30k race.  With hours left at the race site we were jealous of the Norwegians’ nice warm fires and tents.  They were completely prepared for the day which we had thought would be sunny and warm the entire time.  Finally, we decided to ask one of the groups if we could warm up by their fire.  We were obviously Americans to the Norwegians; we could tell because without saying a word they would start talking in English to us.  Shivering and glancing longingly at the fires we finally came up with the courage to ask.  To our surprise they warmingly welcomed us and we quickly took up seats by the fire.  They must have thought that the Americans were very funny because they pulled out all of their cameras and got pictures with us.  We felt like celebrities.  After drying out our things and thanking them again and again ( in Norwegian “takk” means thank you), we departed from the fire before we overstayed our welcome.  In this visit we discovered how nice and welcoming the Norwegians can be. 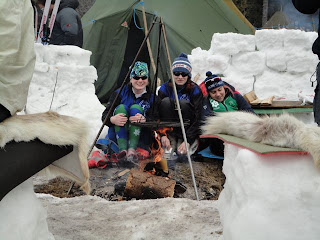 by Emily and Caitlin (with help from Kate, Helen, and Rosalie)

Today we watched the 30/50k World Cup races at Holmenkollen.  There were many fast racers including Olympic medalists. After yesterday’s preview of the course we found ourselves near to the top of one of the biggest hills on the course. We thought Oak Hill was hard…

There were three Americans in each race, including Liz Stephen, our fellow New Englander. 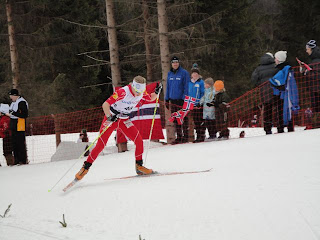 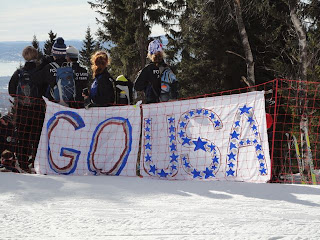 Petter Northug took first in the men’s, and there was a Norweign sweep on the women’s side with Marit Bjoergen taking first. Yesterday when we skied up this hill, I think it’s safe to say we all were having some trouble. But today, we watched as both the men and some of the women V2ed up the same hill at unreal speeds and were thankful that we didn’t have to race it six times ourselves.

Although it was amazing to see these racers, perhaps the most intersting part was the spectators. The course was lined with tents, camp fires, and patriotic Norweigns. Hundreds of people had camped out last night to ensure a good viewing point. By the time we got there it was a total scene; and we weren’t even in the stadium. Faces were painted, beer cans, flags and tents crowded the sidelines. Whenever a Norweign athlete skied by, the crowd erupted with cheers. 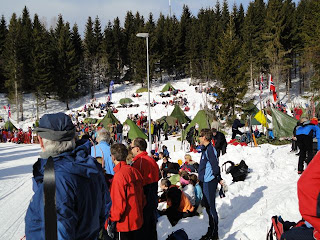 tents up the hillside

Getting there was quite a challenge too. We parked the vans down close to the city and skied 4k uphill to reach the top of Holmenkollen. We thought, as we were driving there, that our approach wouldn’t be a popular way. But the trails were packed with people of all ages and skiing back down meant dodging all of them. Overall, today, we learned just how important nordic skiing is to Norwegains, along with partying and screaming at their home-town heros. 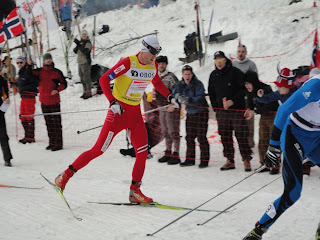 Yesterday afternoon we loaded our vans and drove for an hour. However we actually “drove” for about half of an hour because most of the time we were stopped in traffic. Finally we arrived and were greeted warmly by Jon, one of the coaches. We all introduced eachother and went for a ski. We wound up to the top of the hill where they showed us their beautiful view of Oslo. After some Awes we continued down the other side and had a race to the bottom. Then we did some sprint relays and tried skiing with one ski over our heads. When we had all had enough skiing, they showed us their club house and we contrasted our countries’ cultures over pizza. We also had the chance to meet the world junior champion and watch some of their ski videos. It was an awesome afternoon and we were all very impressed. 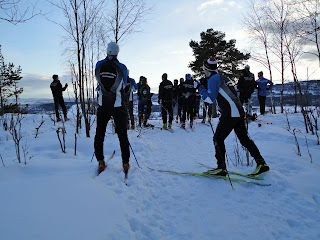 looking at the view 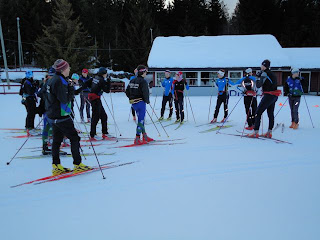 the Bærums Verk stadium and clubhouse 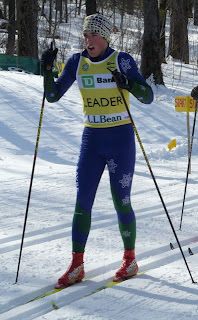 This morning we had the oppurtunity to ski the 8.3k Holmenkollen race course that will be used for tomorrow’s 30/50k freestyle World Cup. This was another eye-opening experience, because we were skiing directly with the likes of Marit Bjoergen, Therese Johaug and Emil Jöensen.
The course was absolutely awesome. It had some challenging corners (enough for Isaiah and George to fall on), and also very skiable hills. Its gonna be a really tough race there tomorrow. Here are some pictures of the team on the course. 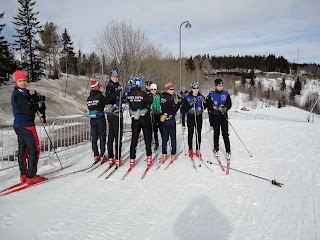 The team on Sat’s course, Therese Johaug had just passed 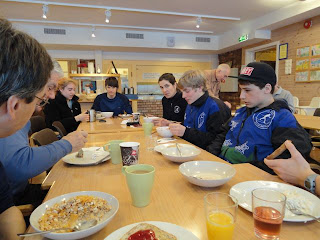