by all of the J2s 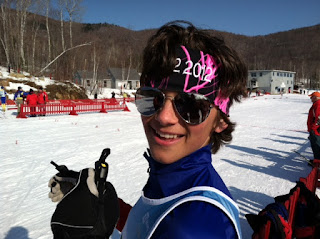 Ford Sayre and Hanover skiers met bright and early at the Norwich public library on Friday to take the four hour drive north to the J2 championships at Rumford, ME.  At the Black Mountain ski spot we headed straight to our New Hampshire uniforms and then to the start of our first race of the weekend – the 5k skate.  There were teams from Vermont, Maine, the Rocky mountains, CXC, New York, Massachusetts, and New Hampshire.  Despite the slushy snow and the dreaded “high  school hill” Tucker finished fifth and Elise finished at sixteenth place.  Everyone had a great race overall and were then welcomed to amazing pumpkin bread and grilled cheeses which were eaten on the hour long bus ride to the hotel.  After dinner, the team had a Yankee swap.  There were many interesting gifts including clown shoes, a mini zen garden, a pee guy and a coke bottle.  The team got to bed early for a 6 am rise the next day.

In the classic 5k, Tucker took 6th place for the guys and Sarah took 18th and first place for the New Hampshire team.  Alexi finished 4th for New Hampshire (37th overall) after being a seeded 18th on the team.  Colin got 5th for the team (29th overall) (he was REALLY jazzed).  After a cool down we headed in for lunch and stretched on the floor to get ready for the afternoon’s 1.2K sprint.  The sprint course went out of the stadium, around a few turns, up a big hill, and back into the stadium.  Elise finished 9th and had an amazing performance.  We soon left the venue to have a quick turnaround at the hotel and back to the banquet with all the teams.  After dinner, we loaded everyone, stuffed with lasagna and salad, into the bus and we shipped off to the hotel.  We got to bed almost immediately except for the select few who naturally seem to stay up way too late.

Sunday was just like the last two days waking up.  We warmed up with the skaters heading out first and then the classic skiers using their race skis to test wax.  The klister had to be adjusted a bit, but in no time we were off and lined up.  Our last race and our first mass start, the start to the 2.2 K was nothing unusual.  It was on the first sharp turn that everything went chaotic.  In mere seconds the bend had turned into a huge pit of snow and flailing bodies, reportedly taking down several New Hampshire victims.  Colin and Chris were lucky and jumped through without major problems.  After that, we had a rather icy trail with minimal slush (very different from the rest of the weekend) and a lot of boxing in on uphills, aggressive opponent passing, and slick ice on the final climb before dropping to the stadium.  The tag zone was very stressful for some, but every girl/boy got the right tag in the end.  Others reported it stayed reasonably smooth Sunday with minimal melting.  Tucker came speeding into the stadium on his skate part in a well earned 5th place, and Alexi had a great race too.  Cool down was a mixture of classic skiers and skaters all together having fun in the last ski together.  Awards went off with no surprises and NH took 3rd place proudly.  VT came second and the CXC kids earned the 1st place title.  Everyone said good bye, packed up and out, and finally we headed back to good old Hanover/Norwich.