Summer was busy with a large list of chores at home, at Scottie’s with Sam Rossier and other JNT members, and at a our family camp in Colchester, VT. I spent a half day with Sam R as he felled about 20 trees in her backyard to allow more sun to hit the solar panels. My job was limber – a challenge because I could not keep up. Other skiers split and stacked – Paddy Caldwell was the most productive with the maul. Late spring my daughter received her PhD in Public Health from BU. Her thesis was about the law in Maine that prohibits junk food advertising in ME schools!! Early summer my son Stephen cut down an over grown cedar hedge at our camp; late summer my son Chris, his daughter Nora, and I removed the stumps with an excavator. I also was given a tour of the trails and biathlon range site at the future Strafford Nordic Center. Jere Linehan is one of the prime leaders of this project; he skied for Hanover and was on the nordic combined B team. A great end before Labor Day weekend was a visit from Liz Stephen for a brief dry land drill demonstration followed by a slide show which gave us a glimpse of her life as a World Cup XC racer. Thanks to Liz for making time to visit Ford Sayre and to Greg DeFrancis for the Montshire space. 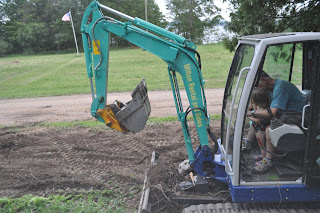