With snow in the future, we began what hopefully will be one of our last foot ODs. Nine athletes started running from Scottie’s warm house into the cold Lyme morning.  A mile on the road warmed us up nicely for the climb to Pinnacle. From the top the snow line was clearly visible on the upper reaches of Smarts and the skiway.  After a quick water break we were off, bushwhacking down to the road.
The Tour de Lyme continued through the McIntyre/Little fields and through the woods onto a series of back-roads through Lyme.  We took advantage of an icy road and pretended to glide up it with poles.  Eventually we made our way back to Scottie’s driveway and some of us did some short spenst up it.
With the OD complete Isaiah, Spencer, George, Noah, and Tucker helped move brush and wood around the yard, while the girls made some fantastic grilled cheese inside.  This will hopefully conclude the final post about an OD on foot in the 2010-2011 ski season!

Since the coaches forgot to bring a camera, today’s graphics are from Dan’s GPS via Strava: 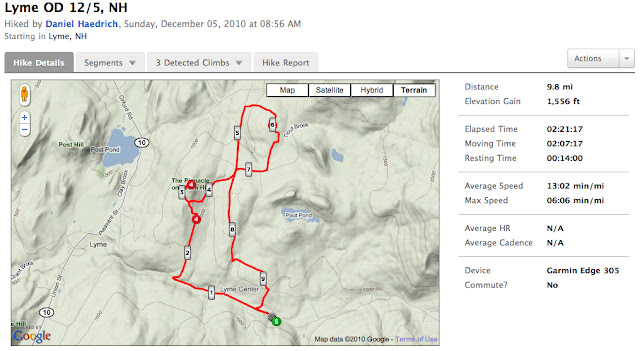