Moosilauke has had a white top for the last several weeks, so the first Sunday hike of the ski season was a reconnaissance trip to the top.  Given rumors of snow, skis had to be brought.

Three cars, two rendezvous points (Dan & Whits and Thetford park and ride) and an hour later, eight JNT skiers with skis strapped to backpacks headed to the summit.  Temperature at the base: 28F, summit: obscured by clouds. 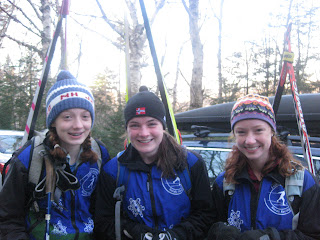 Kate K set a surprisingly brisk pace considering yesterday she had run in the NH cross country championship with a placing that qualified her for the New England Championships.  Halfway to the summit the trail was snow covered and hopes for good skiing ran high! 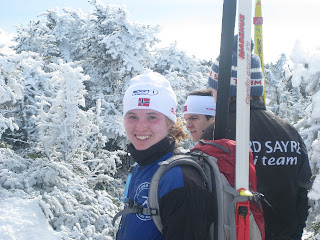 Approaching the summit we broke above the clouds, and entered a world of blue and white: hoar frost covering trees, ground and distant peaks, blue sky above and clouds, driven by a strong north wind, rolling in a three dimensional flow around the mountain.  At the tree line, layers were added in preparation for the summit push, a mad dash across the barren peak. 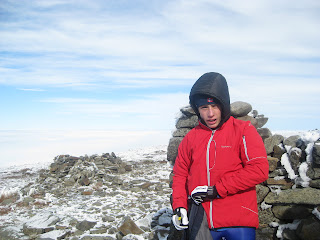 At the summit the wind was absolutely blasting and water bottles were freezing!  So there was just time for a quick photo and then back down the carriage trail, with hope still high of finding some skiable snow before we started the decent. 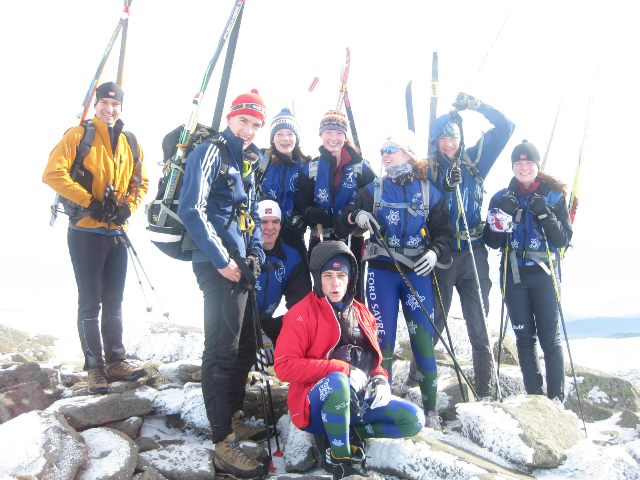 We did find snow, a 40 yard section, rock free.  Four JNT skiers laced up boots and…. skied: mission accomplished!  A quick lunch, and then back to the cars for a round of chocolate milk- total hike time 3 hours 25 minutes. 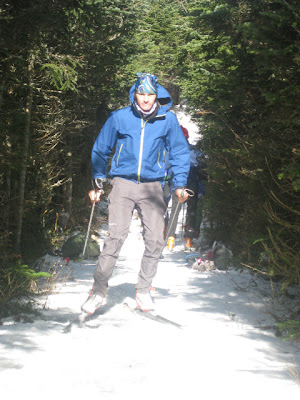