↓
Home Menu ↓
Skip to primary content
Skip to secondary content
written by Isaiah
Today, or yesterday depending on what waking up at 4:45 is considered, the four Birkie skiers (Jack, Paco, Rosalie, and myself) and two coaches woke up to ski the focus of most Norwegians, the Birkebeiner. After a small breakfast consisting of oatmeal, yogurt, and the fixings, we loaded up into the “Silver Slug” to catch a bus from Lillehammer to Rena. On the course of the two hour ride Paco ended up making a new friend with an experienced “Birkie” skier from Wisconsin. In Rena, the parking lot was packed with tons of skiers, easily the most I’ve seen in one place. The main order of business was to see if Swix was recommending a kick wax to cover our klister medleys. It ended up being VR50. While the more organized three quarters of our group finished our ski preparation, Paco was finding the optimal sack weight or something similar. In an effort to secure good spots near the front of our wave the rest of us headed to the start, after of course reminding Paco to remember his ski stickers and brikke (timing chip). Shortly after the start us guys (unfortunately I have no clue what happened to Rosalie from this point on) found ourselves out in front of our wave and quickly catching the next one. The race course was packed, even with 8 lanes we had to sneak up the side of the trail to get by anyone. Obviously people were not observing the stay right except to pass recommendations. As far as wax, our skis had perfect kick (thank you Scottie and Dennis), which is fortunate because the first third of the race is completely uphill. Soon after the start Jack and I lost sight of Paco in the masses ahead. So we skied together for a good portion of the race, until the first downhill. That’s when I found out that my klister zones weren’t the most clearly marked. That combined with Jack’s impressive speed in and out of the feed zones left me skiing relatively alone amongst the thousands of other skiers. Eventually I stopped to scrape back some klister, actually twice. Good thing too because the second half of the race is mostly downhill and flat. In regards to feed zones, I was very impressed, there were usually at least two options including water and Powerade early on, and in the second half Coke, smoothies, bananas, and a plethora of European sports drinks and energy bars. Between feed stations there were often groups of people offering drinks or food unofficially, often companies promoting their one drink or families watching the race. However, the most impressive display of food was at the finish, the race organizers had set up all the afore mentioned in addition to chips, oranges, soup, bread, and the best apples I’ve ever chowed on. After meeting up with Paco and Jack on the outside world, we learned that lo and behold, Paco “lost” his brikke. As far as results, Jack was the only one to make The Mark, although he’s skeptical as to how he made it even while not making the Mark time, Paco may have made it but we’ll probably never know… 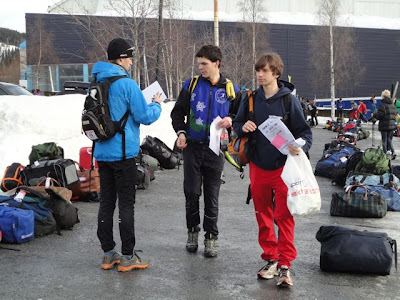 finding bags after the race 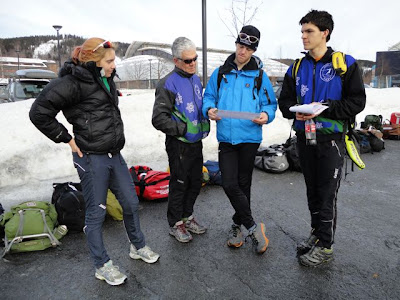 Jack wondering whether he really made the mark