written by Paco and Noah

On Wednesday evening our group headed to the Veldre Ski Club’s trails -about a 40 minute drive from our apartments – for a night race. Earlier in the day, the club had posted a welcome to us on their website:
http://www.veldreski.net/
The drive took us through rural Norway, characterized by sloping forests and bumpy, frost heave-infested roads. We were surprised to find the venue more or less in the middle of nowhere. The venue was pretty awesome though. We were met by several large advertisement boards endorsed by local companies who wanted to show their support, a biathlon range, a two-story timing building, and a club house complete with kitchen, bathrooms, and large common room. The race consisted of a longish 3k loop and a 2k loop making a 5k lighted race. Warming up we saw a hot shot Norwegian 14 year-old, or our host said he was “very fast”, he told us he was second at the Junior Birkie last Sunday (out of over 1700 junior competitors!). The biggest confusion of the race was how to deal with the “Brikks” that they told us we needed. For most of us, we didn’t know we needed them until we got to the start line and the race volunteers began shouting at each other in Norwegian and putting them on our ankles. The “bricks” were simply timing chips they were testing out for a bigger race this weekend.
The race experience was like skiing in a tunnel. The lights had to be on and that meant you couldn’t see the forest, only the trail. The start was individual and they were very casual about starting. There were so many little kids of all ages racing before us and there were all the older men racing as seniors. There was a very fun corner on the 3k loop that we all loved, and some steep uphills that forced us to herring bone. Paco won his age group and had the fastest overall time by 3 seconds.
Jack conversed with the organizers in Norwegian and translated the announcing for us.  Throughout the race, the announcer talked about this Wednesday night race as being historic for two reasons: it was the first to include a biathlon race, and the club had visitors from the US!
Overall we had a great time at the night race and gained a lot of experience that we wouldn’t have gotten from a domestic race. 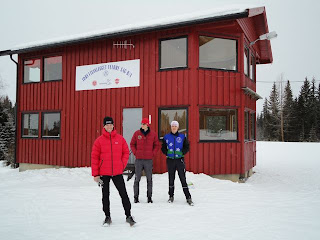 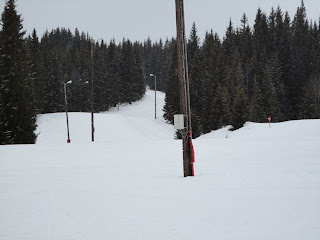 the race course – before dark! 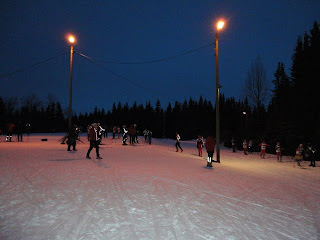 start of the little kids’ race 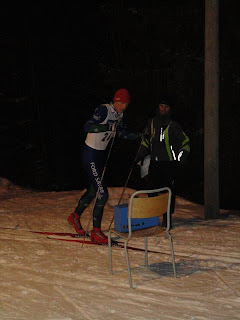